Skip to content
PrevPreviousBuy less, wear more!
NextRelight your fire: How to love your job againNext 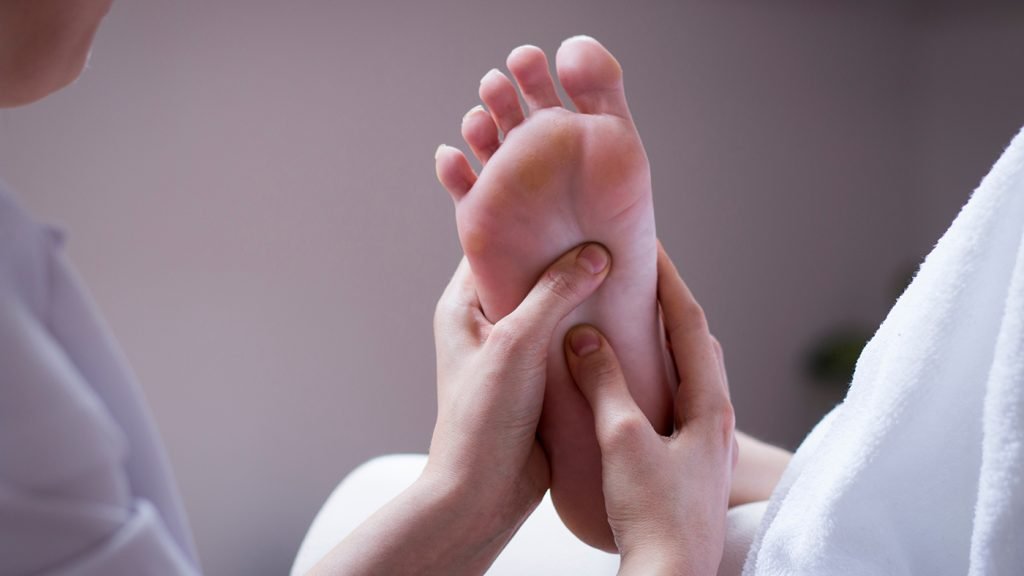 Can reflexology help my menopausal symptoms?

I’m quite fond of an ‘alternative’ treatment. I’ve had acupuncture to help with a shoulder injury and successfully used homeopathic medicines to treat my sinus problems. However, when it comes to the peri-menopause, I’ve been quite happy letting my GP dictate what I should take to help deal with the symptoms. So far, this includes a low dosage of HRT, which seems to be having some effect – my periods are more regular, my brain fog has lifted, and my joints don’t ache quite as much…

Lately though, I’ve been wondering if there’s more that I could do. I still feel tired, have very disrupted sleep and struggle with low energy levels. I’m also bordering on permanent Hulk status with the slightest thing making me fly into a rage.

Chatting to a friend about my worries, she told me how reflexology had helped her deal with her painful and irregular periods. It’s a treatment that I’d never really thought about. I know it’s more than just a foot massage, but I couldn’t understand why it would be beneficial for stuff not related to your feet!

With this in mind, I contacted the Association of Reflexologists (AoR) to find out more. Tracey Smith, Head of Reflexology Support and Research, told me that reflexology can actually help out with a whole range of symptoms.

“Reflexology is a complementary therapy that is based on the theory that different points and areas on the feet, lower leg, hands, face and ears correspond with different areas of the body,” explained Tracey.

“Reflexologists believe that working these points or areas can help aid relaxation, improve mood, release tension, enhance sleep and can generally help improve wellbeing; allowing us to cope better with the stresses that life can bring.”

So, could it work on my menopausal symptoms then? According to Tracey, reflexology works on a very individual level.

“We acknowledge that every person is unique,” she said. “Some people find other things improve as well – the only way to know if reflexology will help you is to try it!”

What happens in a reflexology session?

I’m very much of the tried and tested mindset so I made an appointment to see Tracey, who practises in London twice a week.

Now I should say at this point, I hate feet – particularly mine. I have horrible nails thanks to lots of running, hard skin on my heels and my feet are generally just not a thing I like having touched! I did wonder how I would cope with an hour of some stranger massaging my feet, but I needn’t have worried as Tracey is a pro and totally put me at ease.

Tracey got into reflexology quite by chance. Originally a scientist, she had hoped to sign up for a wine tasting class at her local college but finding it fully booked, she instead decided to try reflexology. Each week, she and a fellow student worked on each other’s feet and she immediately noticed a big change to her health.

“I used to get migraines – I’ve not had migraines since,” she told me. “And I used to have five-week periods, which meant in the last week, I felt rubbish, and they went to four weeks and stayed at that until I started having the menopause!” She tells me stories about clients she’s worked on and the success they’ve had – no more migraines, sleeping better – but I suppose the only way to truly know if it works for you is to experience it yourself.

During the treatment – which is really pleasant and doesn’t make me squirm at all – Tracey finds different areas of concern. As a reflexologist, she can’t diagnose but instead she makes plenty of helpful suggestions.

When Tracey hits a certain spot on the top of my foot, boy does it hurt, and it’s indicative that I have a tight IT band rather than the plantar fasciitis I thought I had. There was also a suggestion that there wasn’t something quite right with my pelvis, so Tracey asks me if I’ve ever fallen onto my bum, which I did about eight years ago!

She then massages my right sole of my foot – which is definitely very sore – asking me about asthma or bronchitis. When I reply I’ve had neither she says this can relate to withheld anger or grief. I’ve definitely got a whole lot of the former and explain how wound up I am about life in general.

“You may find something comes out in the next couple of days,” she told me.

“Often these sorts of things happen when you’re not on show, so maybe you’ll find yourself doing the ironing and suddenly you’ll burst into tears and you don’t know why. Let it go.”

At the end of the session, I feel super relaxed. I walk away with a bounce in my step and a hope that this could actually help make me feel better in myself.

The next day, I wake up feeling slightly battered – as if I’d had a really intense sports massage all around my shoulders and neck. Tracey did say she had worked on this area as it seemed very tender.

I also had no pain in my foot – the first time in over a month – and more importantly, I slept like a baby. In fact, it almost felt like I was drugged slightly such was the depth of my sleep. Even when my son woke me up in the middle of the night with a bad nightmare, I was able to go back to sleep instantly – believe me, this never normally happens.

I still haven’t sobbed my heart out however I do feel lighter and less weighed down with things, so perhaps what she did helped to release something. I certainly don’t feel so anxious as I normally do and I’ve had a bit more get up and go!

Reflexology it seems is all about becoming a more balanced you. As Tracey explained it to me: “The theory of reflexology is that it can help with both physical and emotional imbalances and that we hold them in our bodies and they’re not necessarily a good thing to have.”

It’s also something that’s definitely a personal thing – what works for one, may not work for others – but I’ve found it a truly enjoyable and eye-opening experience. I really didn’t expect to feel it quite so much the next day and it’s definitely an avenue that I want to continue to explore. Tracey also told me great things about reflexology on children with special education needs, so I’m now keen to try it out on my autistic son to see if it can help even him out and get him to sleep better. Who knew the power that lies in our feet?

Visit www.aor.org.uk to find a reflexologist near you

PrevPreviousBuy less, wear more!
NextRelight your fire: How to love your job againNext