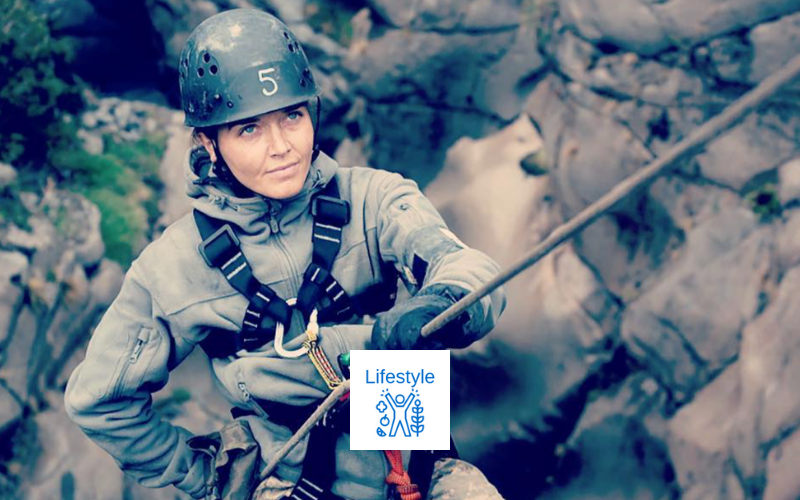 These SAS girls are on fire Last night I was lucky enough to watch the final episode of the celebrity edition of the Channel 4 series SAS: Who Dares Wins with the finalists themselves. There was a big group of us, all squished into a room in a club in central London, some of us perched on the edge of armchairs, sharing seats, holding drinks and cheering the large screen when the iconic music began. For those of you who haven’t watched any of it, I urge you to, and not just because I’m in it.

Why did I do it? Well, as a woman staring at 50 as her next birthday, I simply wanted to see how far I was capable of pushing myself. I believe that we only push ourselves to our own self-imposed boundaries, and I was curious to see how far I was able to go – mentally, physically and emotionally – when those boundaries are pushed not to my limits, but to someone else’s. It was in interesting experiment in self-development, and those of you who have watched my part in the series will have seen that I found the experience more emotionally challenging than I expected. Emotions and memories that I had carefully boxed away and buried flew open, and my first 24 hours were extremely difficult. This was something I hadn’t anticipated.

The physical hardship was brutal – we were thousands of feet up in the Chilean Andes, in a bleak mountainous region consisting of rock and snow, constantly being forced to test our strength of character and willpower. Our first task, with a moment’s notice, barked instruction and no option to refuse, was to fall backwards out of a helicopter hovering over a cold, brown lake. I’ll say it again – backwards out of a helicopter, landing on your head, from 30 feet up. It was the singularly most terrifying experience of my life, because my brain, my functioning sensible brain, gave me a thousand reasons why this was a VERY BAD IDEA. I followed barely comprehensible instructions over the noise of helicopter blades and terror rushing in my ears, ignored every gut instinct telling me to not to fall back into the Chilean sky and did it anyway. When I hit the water, the noise was deafening. I thought my head was going to explode. But before I could take that in, water was rushing up my nose as I was upside down and heading downwards, momentum propelling me deeper into the lake. I opened my tightly squeezed eyes and just saw brown. I righted myself under the water and tried to kick out, but my clothes and heavy army boots were filling with water. I waved my arms above my head and kicked and kicked until I felt my hands break free of the surface. I kicked again, and suddenly my head was free and I gasped and gurgled wet air into my straining lungs. It had taken seconds, less than a minute, but it felt like forever. I treaded water for a couple of beats to pull myself together then swam for shore.

That was the start of SAS: Who Dares Wins. There was no special treatment, no hot showers or fresh clothes, or warm beds. We were treated exactly like any other person taking part – as we should. It was brutal. My time came to an end after being made to fight a team mate in a brutal two-against-one boxing bout, endless ‘beastings’ where I was forced to perform gruelling exercises in the biting cold in the middle of the night, run with a 23kg rucksack on my back, battle in freezing, sticky mud for a single car tyre, climb a sheer rock face and then abseil face-first down in pelting sleet so cold I lost all feeling in my bleeding fingertips.

I collapsed on the mountainside with hypothermia, and was carried off to a waiting ambulance, where a kindly doctor told me that because I was going through the menopause, my body had lost the ability to regulate its temperature. Once I re-entered the wintery conditions, it would become as cold as it was on that mountainside.

I was offered the chance to stay; I was offered the chance to sleep in the warm doctor’s office, and an extra layer of clothing to the other recruits, because of my medical condition. I refused. I effectively voluntarily withdrew because I didn’t want to be treated any differently to anyone else; I wanted to experience things in the same way as my fellow teammates, and I was happy to go when I did, how I did. I had found my limit.

Last night, watching the final episode, I knew I had made the right decision.

There has been much talk in the press about the decision to allow women into the Special Forces, with strong arguments both for and against. The arguments are valid, particularly those from the Special Forces themselves, who are the only ones who truly understand what is asked of anyone who becomes a member of this elite fighting force. Anyone who has regularly watched the television series will understand what I mean when I say it that success or failure has as much to do with mental fortitude as it does strength of muscle, and the women who made it to the final stages proved that they had both in equal measure.

They had all endured days of gruelling physical endurance, and 24 hours of brutal psychological torture, being forced into crippling stress positions for hours on end, wearing headphones playing squealing pigs, screaming babies, metal dragged on metal and other horrifying sounds. They were faced with interrogators who tried to turn them against each other, and Victoria Pendleton was forced to her knees and held by the hair while snarling dogs barked in her face. While visibly shaken, she stayed calm and in control.

In the final test of endurance, the four were taken high into the mountains and made to run for a kilometre through deep snow. Once they’d done that, they had to carry each other uphill in a designated time. Then finally, the ultimate test of physical endurance and mental strength. Once by one, AJ, Victoria, Wayne and Jeff lowered themselves into holes cut in the snow, submerge themselves in the icy water, and then swum underneath the ice to the next hole. Four times. Each time they surfaced, they were asked a question to test their mental capabilities under such stress. Finally they could get out, and were ordered to roll in the snow to ‘dry off’. In a tiny tent on the side of the mountain, they got changed into dry clothes and waited to hear who would be claimed the winner; who had passed SAS selection. As the four of them stood side by side, shivering and exhausted, the DS’s conferred amongst themselves. There was one outstanding winner – not only was he the fittest and strongest person who consistently came first in pretty much every task he was set, but he was (and is) one of the nicest men I’ve ever met. He worried constantly that he wasn’t pushing himself enough, that he’d been too emotional, that he’d somehow let himself down, even when he was by far and away the most capable person there. Wayne Bridge was a worthy winner, and I hope that winning the series will lead to even bigger and better things for him.

But for me, AJ and Victoria proved that physical strength is not the only attribute that marks a winner. Don’t get me wrong; they were incredibly strong… unbelievably strong! They completed every task that was asked of the group and in some cases they showed more strength than the men alongside them. They dug deep, put one foot in front of the other and just kept going.

To me, they embody everything that This Girl Is On Fire is all about – they proved that they are capable of more. More than viewers thought they were capable of, and much more than most of us watching from the comfort of our living rooms could dream of. They reached their boundaries and pushed past them, again and again. They stopped, they gathered their strength, and they started again – but they never gave up.

Eleanor Roosevelt famously said that a woman is like a tea bag – you don’t know how strong she is until you put her in hot water. AJ and Victoria proved that sometimes ice-cold water is all you need to show just how on fire some women really are.