Skip to content
PrevPreviousHow adding oil to your skin care routine can improve your skin
NextIs it time to leave your job…for good?Next 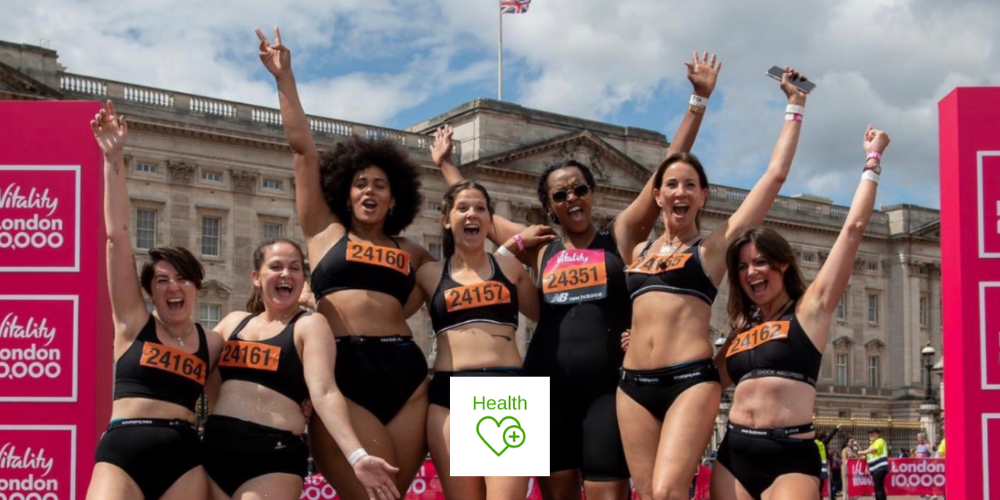 What I’ve learnt from running a 10k race

On Bank Holiday Monday, this happened. I ran my first ever 10k race. That in itself is not the amazing part, although it kind of is because I am NOT A RUNNER. I’ll give you an example of how much before this I didn’t run…

Last year, on holiday with a group of girl friends, some of them decided to go for a run. I thought I’d give it a go and join them – we were in Ibiza, it was beautiful, it would be an incredible start to the day and I was feeling good. The next morning we all got up extra early, pulled on our trainers and set off. By quarter of a mile I was DONE. Out of breath, a horrible stitch biting into my side. I got further and further behind as they trotted on, pony tails swinging, brown legs pumping, chatting as they ran. Yes, chatting. They were managing to TALK while I could hardly breathe.

I tried to keep up. I really, really tried. Mainly because I didn’t want to lose them and I wasn’t entirely sure where we were supposed to be heading to. But I couldn’t. They sailed off round a corner and I had to slow to a walk, and as I turned the corner they were gone. I had no idea where to go. I knew there had been talk of ‘running to the beach’ but I had no idea where this beach was. I plodded on, gradually realising how empty it was on this deserted back road through the Ibizan countryside. There was the odd house but otherwise it was quiet. I felt stupid and scared. As I walked determinedly past a house a big scruffy dog rushed out at me. I literally nearly wet myself I got such a fright. I love dogs, and I knew he was just protecting his home and was probably just going to make a hell of a racket then leave me alone, but I didn’t know for sure. I slowed to a tentative walk, and edged my way past him, forcing myself to stay calm and not give off any threatening signals or scent. It took forever. He kept barking and lunging at me, even after I passed him, then eventually trotted back inside.

By now I had no hope of catching up with my friends. I broke into a lumbering, not at all runner-like pace and kept going. I forced myself to look at the trees and sky and pretend everything was fine and I was loving this. It didn’t work. Out of nowhere, roaring down the tiny road in the way that only Spanish drivers can, the biggest bin lorry in the world (OK, Ibiza) cape ROARING round the corner on my side of the road. My heart jumped first and my legs jumped second, straight into a scrubby bush. By now I was tearful, scared, scratched and just wanted to go home. I didn’t know whether to turn round or keep going; was I closer to them than I was to the villa? And I’d have to walk past the angry dog again. I decided to keep going.

What felt like a week later I finally saw the glittering sea, and at the bottom of the hill, my friends standing around chatting. “Where’ve you BEEN?” they laughed. “We’ve been here AGES!” I wanted to thump every single one of them. Every one. In their faces.

I had not run since.

So, in November last year when Bryony Gordon texted me to ask if I’d consider running with her to promote body confidence in women, my first answer wasn’t “yes”. When I found out it would mean running in my underwear, it definitely wasn’t “yes!”. But then I thought about it. I thought, how can I tell women to push themselves past their comfort zone, beyond that place where they know they are capable and into the place where things hurt, are difficult and the finish line literally isn’t guaranteed, if I don’t put my money where my mouth is and do it myself? I texted her back and said sign me up..

I started training in January. Getting to 1k was painful. My ankles hurt. My back hurt. My knee hurt a lot. A week later I pushed it to 2k. And then 3k. It took me three months to get to 5k and I was so pleased with myself! And then I got stuck, I couldn’t seem to get any further without flagging. Then in April I managed to get to 7k by running a bigger loop on the streets around my house. May arrived and I was no further along. Then, with three weeks until race day, I saw a post on Instagram by one of my fellow runners saying they had done it – they had cracked 10k! It was like a gauntlet has been thrown – I HAD to do this.

So one Sunday, I got up early, picked a podcast and set off. I decided that the only way I was going to do it was to run 5k away from my house then I’d have to run 5k back – simple! The podcast was an interview with the writer and actress Phoebe Waller-Bridge, she of Fleabag fame. I am a big fan of hers, (I think I may have a slight girl-crush on her…) and it was listening to her that kept me going. I ran for the whole interview and then I only had two kilometres left.

The next interview came on and it was with a slightly irritating American actress but I didn’t want to stop and change it in case I broke my stride. Those 2k seemed longer and harder than any I’ve ever run (apart from Ibiza, nothing compares to the awfulness of the Ibiza run). But then it happened, my running app announced in my headphones: “Distance – ten kilometres” in that strange robotic voice. I stopped in the street. It was empty. There was no one around to mark this momentous occasion, so I high-fived myself and walked 200 metres or so home. I was ecstatic! Ten kilometres! Me! I was bright red, sweating buckets, hotter than the sun and knackered but I felt INVINCIBLE!

And so it was that this Bank Holiday Monday I stood with 800 women and stripped off my leggings and sweatshirt, attached my runners number to my sports bra and made my way to the start line wearing nothing but stout knickers, a sturdy sports bra and my trainers. Not only was I running, but I was running practically naked through the streets of London.

I knew the stakes were higher for me than many of the other incredible women who did the same. Because of my job, because I work on the telly and am well-known, I knew there would be paparazzi around waiting to get hideous pictures of me to sell to the newspapers and magazines. I had thought about this when I signed up, and I considered cutting out carbs and juicing and all those things you read about people doing to become lean, mean running machines.

I didn’t do any of these things. I eat really well anyway and the thought of cutting things out was too disheartening. So I trained, ate well and a few times a week while watching ‘Nashville’ on TV I zipped myself into a machine a friend had let me borrow. It was called a Body Ballancer and it looks like a pair of Wallace and Gromit trousers. It inflates with air and squeezes your legs to help with lymphatic drainage. My friend had used it when she was training for a charity trek and it helped her heavy legs recover quicker. It looked insane, but it was a lovely feeling just to be gently squashed and squeezed while laying on my couch. It did help with my sore, heavy legs too.

On the day of the race I shaved my legs but that was as far as  my preparation went. I wanted to look like ‘me’ – not a ‘perfect’ telly version of me.

So how was the race? It was wonderful. I ended up by chance running alongside the lovely Giovanna Fletcher, who was as warm and friendly in real life as she appears on her podcasts.

The beautiful plus-size model Shareefa and the wonderful Anna from The Running Channel completed our quartet and we stuck together for the full 10k, encouraging each other, giving advice. Thank you Anna for reassuring me that the pins and needles in my feet were down to my laces being done too tight and nothing more sinister.

When Shareefa flagged we kept her going, even when she didn’t really want us to, which us what friends do! With 25 metres to the finish line we lined up and did a sprint finish, coming over the line at exactly the same time. We had done it!

So what was it like? It was intimidating, it hurt, it pushed me past my comfort zone and was one of the best things I’ve ever done, which is EXACTLY what I hoped it would be. I am so glad I said yes to doing it, and I hope it inspires you to do the same.

Keep pushing. Keep looking up. Even when it’s tough, use the motto I live by… Just Keep Going.

PrevPreviousHow adding oil to your skin care routine can improve your skin
NextIs it time to leave your job…for good?Next